About 26 states are expected to introduce new restrictions or bans after the court reversed its 50-year-old Roe v Wade decision.

And 13 states have so-called trigger laws in place that will see abortion banned within 30 days.

President Biden described the ruling as “It’s a realisation of an extreme ideology and a tragic error by the Supreme Court”.

Make no mistake: Today's overruling of Roe v. Wade is the culmination of a deliberate effort over decades to upset the balance of our law.

It’s a realization of an extreme ideology and a tragic error by the Supreme Court.

In Phoenix, Arizona, police fired tear gas after pro-choice protesters banged on the doors and windows of the state capitol. In Los Angeles, protesters briefly blocked traffic on a highway.

Meanwhile protests are expected to continue in cities around the country on Saturday.

At an abortion clinic in Little Rock, Arkansas – a state with a so-called trigger law allowing an instant ban – the doors to the patient area shut as soon as the court’s opinion was posted online. Staff made calls to tell women that their appointments were cancelled.

“No matter how hard we prepare for bad news, when it finally hits, it hits hard. Having to call these patients and tell them Roe v Wade was overturned is heartbreaking,” Nurse Ashli Hunt said.

Escorts at the clinic, who stood in the Arkansas heat day in and day out to accompany patients through the throng of protesters, held a group hug. “I thought that this country would still care about people. Would still care about women,” said Miss Karen, the lead escort.

“You are on notice!” shouted a protester at people still parking their cars at the clinic who had not heard about the decision yet. “My suggestion is for you turn around and leave this place of sin, this place of inequity, this evil place.”

In New Orleans, Louisiana – another trigger law state – the Women’s Health Care Centre, one of only three abortion providers in the state, was closed on Friday and its staff had gone home.

Outside the clinic, volunteer escort Linda Kocher said that the rich women would still be able to access abortions in other states but “poor women will end up in a back alley” for illegal procedures. But anti-abortion campaigner Pastor Bill Shanks said it was a “day for celebration”.

Overall, the Supreme Court ruling is expected to mean about 36 million women of reproductive age will lose access to abortion in their states, according to research from Planned Parenthood, a healthcare organisation that provides abortions.

The decision was met with elation by anti-abortion campaigners outside the court in Washington, but protests against the ruling were scheduled in more than 100 cities on Friday – with more expected through the weekend.

President Biden said, he would work to ensure that state and local officials could not prevent women travelling to have abortions in states where the procedure is legal, and would also protect women’s access to contraception and medication to end pregnancies of up to 10 weeks that is commonly used to treat miscarriages.

My Administration will protect a woman's access to medications approved by the Food and Drug Administration, like contraception and mifepristone, a FDA-approved drug that safely ends an early pregnancy of up to ten weeks and is commonly used to treat miscarriages.

Friday’s ruling amounts to a wholesale reversal of the Supreme Court’s own legal precedent – an extremely rare move – and is likely to set up political battles that divide the nation.

The governors of west coast states California, Washington and Oregon have vowed to protect patients travelling from other states for an abortion.

In states where opinions on abortion are closely split – such as Pennsylvania, Michigan and Wisconsin – the legality of the procedure could be determined on an election-by-election basis. In others, the ruling may set off a new round of legal battles, including over whether individuals can go out of state for abortions or order abortion drugs through mail services.

Meanwhile former Vice-President Mike Pence, a long-standing critic of Roe v Wade, urged anti-abortion campaigners not to stop until “the sanctity of life” was protected by law in every state.

Roe v. Wade, 410 U.S. 113 (1973), was a landmark decision of the U.S. Supreme Court in which the Court ruled that the Constitution of the United States generally protects a pregnant woman’s liberty to choose to have an abortion.

Roe v. Wade has protected a woman’s right to choose, her right to make intensely personal decisions with her doctor.

It reaffirmed basic principles of equality. And it reinforced the fundamental right of privacy — the right of each of us to choose how to live our lives. 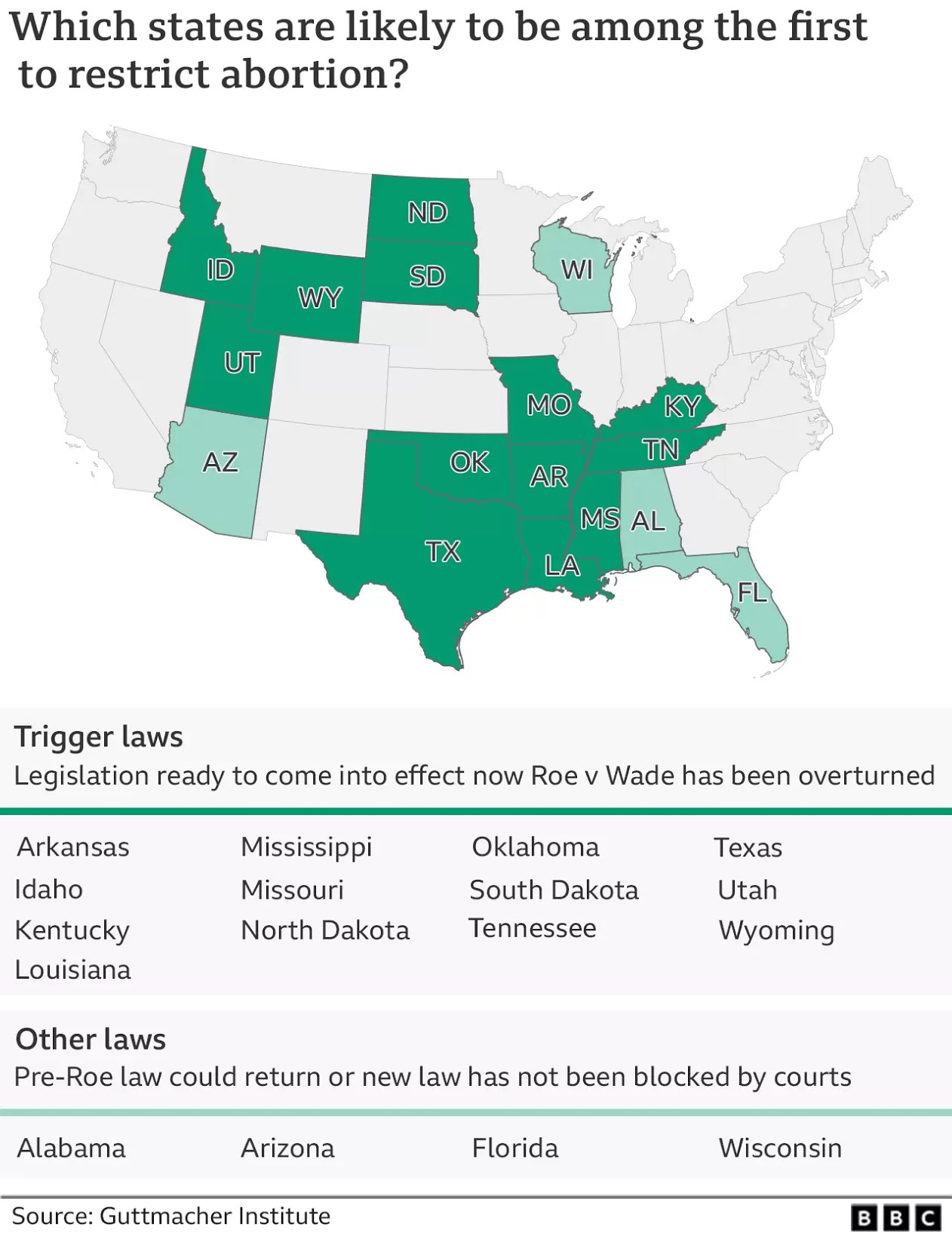 Queen Elizabeth II Dies at 96, Prince Charles Ready to Take The Throne as The New Heir